As Los Angeles and Long Beach ports have 41 vessels queued up like battle ships, Oakland's port is beginning to see the trickle from SoCal. Mapping data from MarineTraffic today (see below) shows there are 17 ships now queuing at anchor at the port of Oakland further north, with many other ships inbound. Of the 17 ships waiting, 11 are boxships. 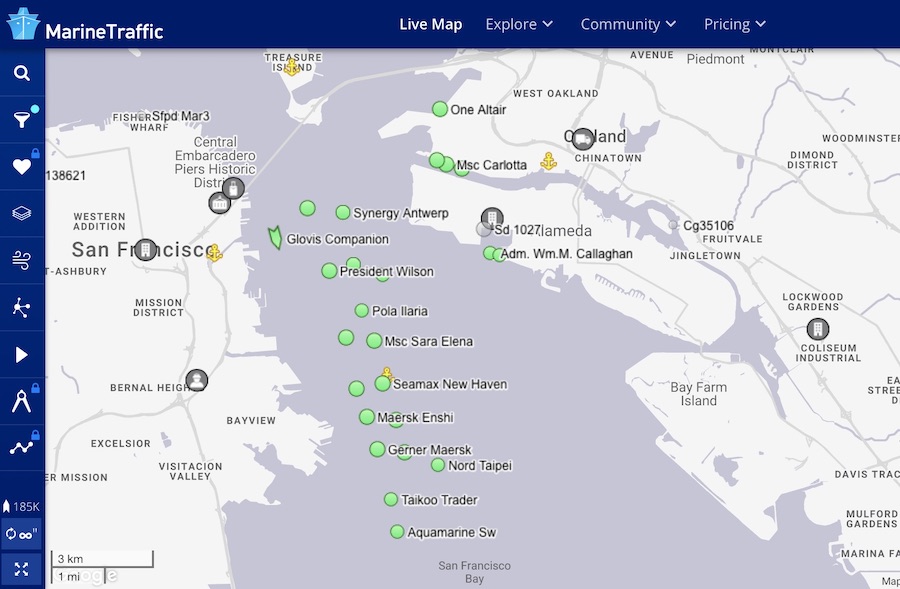 Ships skipping the SoCal clog are creating a large influx at Oakland's port with the new unveiling of CMA CGM's new Golden Gate Bridge Service, the first and only direct service to Oakland from Asia. It was created as an alternative to relieve the congestion in Los Angeles and Long Beach. With labor shortage and equipment shortage, NorCal is beginning to see the start of major congestion. There are hopes to create more Asia -US lines by expanding service to also include Seattle, allowing for new capacity to Pacific Northwest customers.

Don't forget, everyone, even Asia is feeling the congestion.

March 2022-China's lockdowns and Ukraine conflict effects on the Marketplace

Updates on Ukraine and Russian conflict and China's lockdown in Shenzhen

The West Coast MTO Agreement (WCMTOA) announced that the Traffic Mitigation Fee (TMF) at the Ports of Los Angeles and Long Beach will be temporarily adjusted from December 1, 2021, through January 31, 2022, subject to regulatory clearance by the Federal Maritime Commission

The Ports of Long Beach and Los Angeles have announced and made effective a CONTAINER EXCESS DWELL FEE / CONGESTION DWELL FEE for which the ports will charge ocean carriers for each container that exceeds specific dwell time.