Eastbound trans-Pacific Ocean reliability has been at an all-time low in October since data collection of began in 2011. Carriers have been ramping up capacity to meet growing seasonal demands, but summer delays and waves of Covid related shutdowns are causing mounting congestion here and abroad. 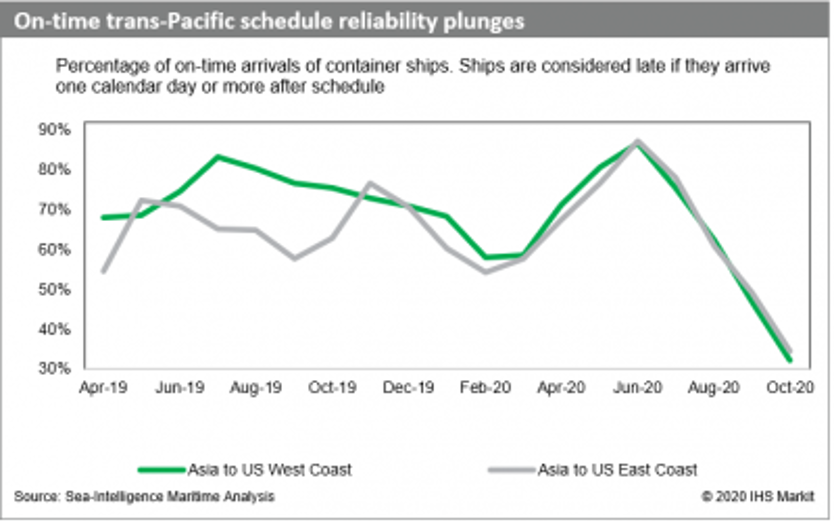 According to the Global Liner Performance report from Sea-Intelligence Maritime Analysis, vessel on-time performance in the Asia–North American trade fell more than 14 percentage points from September to 32.1 percent to the West Coast and 34.5 percent to the East Coast.

The global supply chain is greatly stressed and it’s creating challenges here and abroad. Los Angeles and Long Beach ports are experiencing vessel bunching. As of Monday, 20 vessels awaited anchor in the Long Beach Port. There are lines of trucks, terminal congestion, increased container dwelling time, warehouses are at full capacity and chassis unit circulation is a mess. As we look abroad, Indian shippers are also facing difficulties getting shipments moving. In Colombo, Sri Lankan port authorities have been amped up efforts to get Colombo back to normal flow.

“Sources noted while the berthing scenario at Colombo has moderately improved, terminals there are choked with a huge backlog of containers built over the past month, which they said could take several weeks to clear for daily port activity to reach pre-congestion levels -

‘The Maersk Avon that departed Cochin on Nov. 13 was able to berth at Colombo only on Nov. 26, a typical one-day routing, with its return to Cochin now scheduled for Tuesday or Wednesday — 20 days for the round voyage.’”

Though there are improvements in the Indian import flow, shippers won’t be seeing any price cuts. With high demands and deteriorating conditions at all levels, everyone putting more effort into clearing the global congestion caused by Covid.

March 2022-China's lockdowns and Ukraine conflict effects on the Marketplace

Updates on Ukraine and Russian conflict and China's lockdown in Shenzhen

The West Coast MTO Agreement (WCMTOA) announced that the Traffic Mitigation Fee (TMF) at the Ports of Los Angeles and Long Beach will be temporarily adjusted from December 1, 2021, through January 31, 2022, subject to regulatory clearance by the Federal Maritime Commission

The Ports of Long Beach and Los Angeles have announced and made effective a CONTAINER EXCESS DWELL FEE / CONGESTION DWELL FEE for which the ports will charge ocean carriers for each container that exceeds specific dwell time.